How a cruise can be a foodie’s dream trip 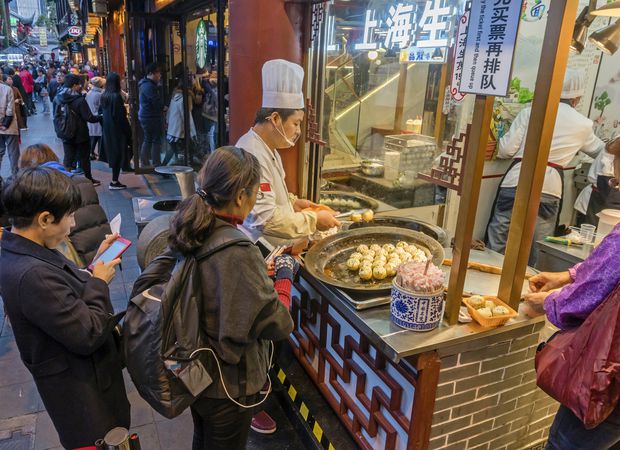 Shanghai is full of glitzy shopping and spectacular architecture, but for me there’s only one real mission in China’s famously international city and it begins and ends with dumplings.

On a recent trip, my boyfriend and I started with the fried-pork dumplings at Yang’s, just a few blocks from the elegant waterfront Bund. These doughy and very plump dumplings have scorched bottoms and are covered in sesame seeds, and they’re filled with savoury minced pork. I dipped each one into a mix of vinegar and chili oil and bit into it, trying not to spray the contained hot pork juice onto my shirt or the guy sitting across from me. (Perhaps noticing my amateur moves with the chopsticks, he passed over a stack of napkins almost immediately.)

Next, we moved onto Jia Jia Tang Bao, just in time for the morning dumpling rush, and we stood in line for 25 minutes, eagerly peering into the small, spare restaurant. Once inside, the activity was a flurry, as waitresses in red aprons distributed the prize we had come to collect: xiao long bao or soup dumplings, particularly of the pork and crab variety. To a soundtrack of slurping, we worked our way through two baskets of briny and broth-filled gems wrapped in delicate and slightly chewy skins. I could have stayed and eaten dumplings for days, even though the restaurant doesn’t have a bathroom and you have to supply your own napkins.

But dumplings were actually just one piece of a bigger culinary picture. On this trip, we were sailing up the East China Sea aboard Windstar’s Star Legend, one of the many Asia itineraries Windstar launched in 2017. The ship departed Hong Kong – where Cantonese dim sum, pick-your-own seafood and shrimp wontons in noodle soup are the clear draws – and continued through four more regions of China’s eight great regional cuisines, all within a week.

While cruising might be a comfortable, relatively affordable and convenient way to see a whole region in a relatively short period, there’s another way to think about it: Cruising might also be the best way to sample a variety of regional delicacies in a single vacation, the kind of experience that gives travellers a broad sense of diverse but unified culinary culture.

My experience with Windstar wasn’t entirely unique. On an Oceania sailing last summer, we hopped across the Mediterranean, from Athens to Barcelona, soaking up regional specialties such as olive oil, fresh fish and cured meats. Princess Cruises has started using an explicit regional food angle, promising Italian sailings with rich risotto in Venice, “bacon-y” (their wonderful word) carbonara in Rome and God-sent pizza in Naples. Across the board, cruise lines are trying to offer more “immersive” local experiences, and many river-cruise itineraries now de facto offer this kind of nuanced immersion, as passengers sip and sample cross-influenced cuisines.

After Hong Kong, we arrived one hazy morning in Zhoushan, a fishing port in Zhejiang province renowned for its fresh seafood. As often happens in Chinese cities with recent big-scale infrastructure projects eagerly embraced by an emergent middle class, everyone kept trying to get us to go to the new mall. But we eventually finagled directions to “Seafood Street,” where we ordered a big plate of vaguely shrimp-like creatures that were whisked away and steamed before being returned to us, now quite pink and noticeably more bug-like. Peeling them took considerable work – they were spiny and sharp, nature’s way of saying “don’t eat me” – but the hard-won flesh was tender and a little sweet, closer to lobster than shrimp.

Our next port was Qingdao, the rare Chinese city with German colonial architecture – the Germans also set up Tsingtao Brewery – and home to Shandong cuisine, characterized by fresh and dried seafood, salty meats and the shift toward wheat over rice that typifies the northern half of China. We wandered through a small maze of back streets lined with vendors selling all manner of local shellfish, including oysters on the half-shell, squid on a stick and a definite contender for world’s largest crab ball. I opted for a street snack affectionately known as a “Chinese hamburger”: stir-fried pork, mild peppers and cilantro wedged into a soft bun – very salty and immensely satisfying.

In Beijing, our point of disembarkation, we made a beeline for roast duck with a side of hand-pulled wheat noodles and steamed spinach topped with a thick, sweet sesame sauce. The restaurant was in a five-star hotel and my boyfriend, a watch buff, noticed that the millennial sitting next to us was sporting a $45,000 Rolex. But mostly, we were focused on the delicious duck – slowly roasted over date wood, with perfectly crispy skin atop a succulent layer of warm fat and paired with impeccable flour pancakes, sweet hoisin sauce and sharp spring onions.

In a strange way, Beijing’s roast duck is the perfect complement to Hong Kong’s shrimp wontons. From south to north, snapshots of a culinary narrative emerged. These regional sailings provide the opportunity to hopscotch across a massive territory, to establish a good sense of the richness, variety and shared influences of regional cuisine. And, even better, to try a scintillatingly new culinary experience each time the ship arrives in port.