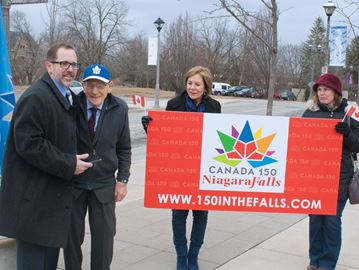 The clinking of wine glasses and the sound of fireworks helped usher in the city’s celebration of Canada’s 150th birthday.

But not before there was an official flag raising at Rosberg Park featuring Maple Leafs legendary backstopper Johnny Bower, who helped out Mayor Jim Diodati at the ceremony.

The city’s goal is to host 150 events throughout the year in honour of Canada’s sesquicentennial, including a three-day event downtown from June 30 to July 2. Last weekend’s Niagara Falls Icewine Festival served as the first event on the calendar.