For Whom the Road Tolls 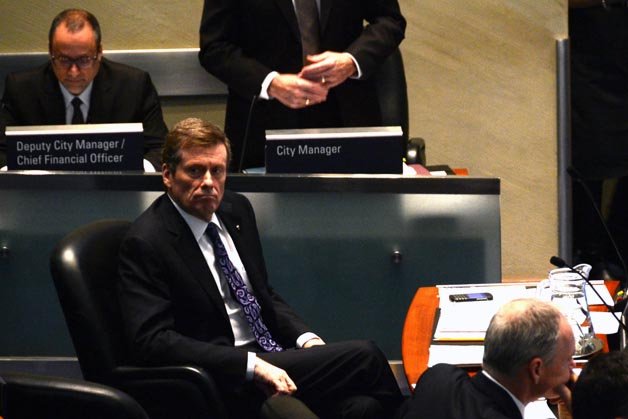 The Queen's Park press gallery, and the Toronto Star in particular, have been left aghast by Ontario Premier Kathleen Wynne's decision last week to deny Toronto city council's request to impose road tolls on the Gardiner and DVP.

You'd think Wynne had just stabbed John Tory in the back from the sharp reaction Friday that the province would not grant Toronto council's request, presumably to cover the ballooning costs of transit and housing. The coverage has been full of references to Wynne's "betrayal" of Tory, and her "duplicity" and "dishonesty." It's all a very queer to characterize Wynne's move simply as an act of political self-preservation to hang onto 905 votes – which it is, in part.

This is politics after all. And when women play the game as fiercely as men there seems to be a different lens applied. But I digress. Wynne didn't exactly leave Tory empty-handed. In denying council's request on road tolls, the province also announced that it will be doubling the provincial portion of the gas tax currently going to municipalities, which means an extra $170 million a year for Toronto.

But that news was somewhat lost in the outrage. Precious little attention, meanwhile, has been paid to how Toronto's finances under Tory have gotten to the point where once again the city is having to raise taxes or go cap in hand to the province.

In fact, if you want to talk about political self-preservation, Wynne's not the only one playing that game. Tory's own financial decisions have been marked by political expediency.

Take for instance his decision right out of the box to spend a cool $2.6 billion bucks (since gone up to $3.6 billion) that the city doesn't have over the next 10 years to keep up a little-used and crumbling section of the Gardiner – and just so a few thousand people who use the stretch during rush hour won't have to spend an extra minute in traffic. Tory could have opted to tear the section down, but instead strong-armed council into spending twice as much rebuilding the stretch so he could keep an election promise to his auto-bound base.

Then there's the police budget. While school nutrition programs are facing the axe and Tory's vaunted poverty reduction strategy gets short changed as city shelters overflow, the cops are still getting their $1 billion for 2017. Tory touted the $40 million less being spent on policing this year over last as significant, but most of that savings, if you want to call it that, is due to a hiring freeze, not departmental cuts. Instead, Tory is giving cops less work, putting in motion a plan to turn over traffic responsibilities to TTC fare enforcement officers.

Then there's SmartTrack. Tory's $8-billion signature express rail scheme keeps shrinking and getting more expensive, saddling the city with an extra $100 million in transit operating costs (not to mention expensive studies to figure a way around a three-stop section at Mount Dennis) should it ever get built. That won't be for 12 years, five years later than the seven promised by Tory during the campaign – and then, only if the money can be raised. On that count, Tory's tax increment financing scheme falls millions short.

Meanwhile, across town, the white elephant known as the Sheppard subway, a one-stop extension to nowhere, which Tory now supports after defending a three-stop option, continues to suck up valuable city resources. The city is still on the hook for the purchase of vehicles for the now abandoned LRT that the previous council approved in the subway's place.

Tory has been cast as a hero on road tolls. Here we had a right-wing mayor – who once called tolls "highway robbery" – pushing what is essentially a tax to fight congestion, or so the theory goes. There will supposedly never be a better opportunity than with Tory.

But Tory could have opted for anyone of the raft of other revenue tolls available to raise money for the city. Indeed, if Tory really had political courage, he would have asked council to pass a parking levy on commercial lots, which would have brought the city more revenue than road tolls.

Instead, he caved to wealthy lobbying interests, floating the idea of selling off the parking authority (a cash cow for the city) and a piece of Toronto Hydro. More recently Tory has talked about privatizing garbage pick up east of Yonge, an idea he said during the election he would not pursue if it proved more expensive than public pick-up. The verdict has long been in on that: a public-private mix like we have now is the best way to ensure the biggest bang for the buck. Still, Tory is harping. Will private pick now be a main plank in his re-election bid?

Road tolls are a great idea. They are key to fighting congestion and changing our car-centric behaviour. Encouraging people who live in the 905 to take GO Transit, for example, or carpool to get to work in the city would be ideal.

But it's also true that most people are stretched financially. And that the answer to every funding question before council can't be to raise taxes or beg the province for money. There is only so much to go around. And for any level of government, how to spend is a matter of setting priorities. In the case of road tolls, Tory chose monied interests over the public.

Tory was full of vim and vinegar at a press conference called to react to Wynne's decision. He called the province's move "shortsighted." And warned that the province would "wear it," presumably in the next election.

Easy for Tory to sit back and let Wynne take the heat for road tolls while she's fighting for her political life and PC leader Patrick Brown, who does not support road tolls by the way, is riding high in the polls. But I have to ask: whom do you think Tory will be bucking for in the next provincial election?

Lefties on council who backed Tory on tolls also expressed disappointment at Wynne's decision. But last time I checked, NDP leader Andrea Horwath was lined up with Brown on the issue.

If anyone should be feeling betrayed, it's Wynne, without whose support Tory would not have won in 2014. Liberal party backers put Tory over the top. Tory now says he's done with "begging and pleading" with the province. That would be a good start.