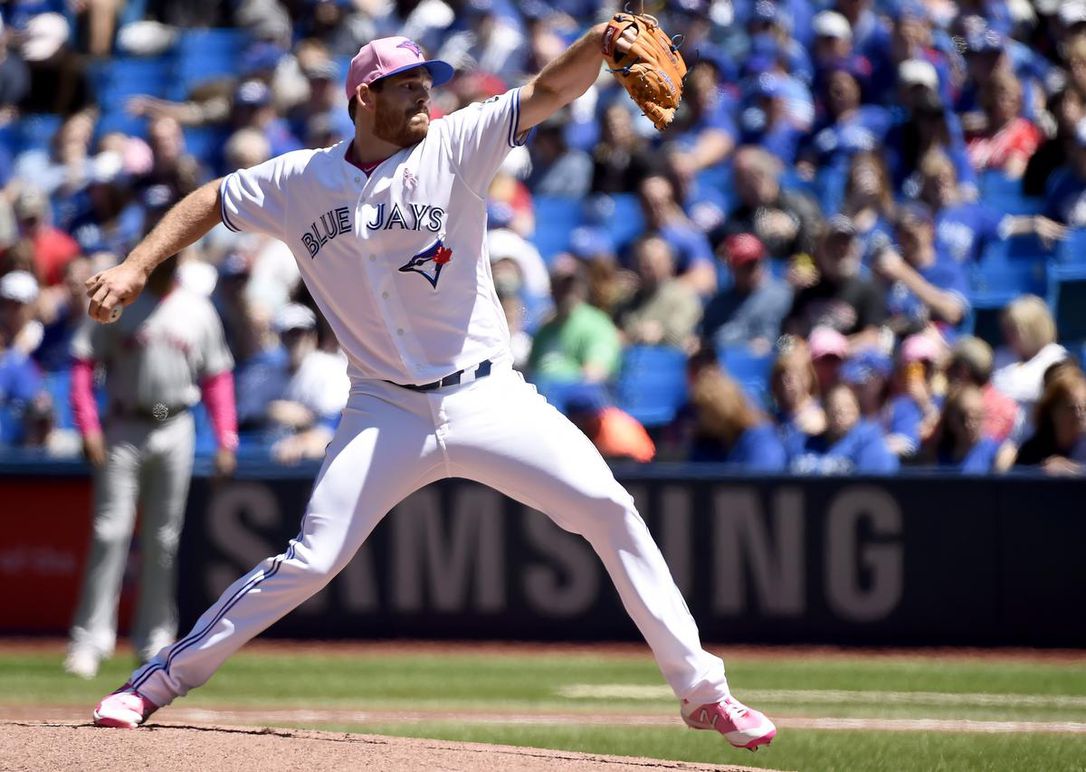 The brain trust is clearly of two minds when it comes to the existential question: Is Biagini a starter or a reliever?

So back and forth he goes, up and down he goes, in a transition now into its second year.

Recall the halcyon days of 2016 when Biagini was such a strong option and workhorse coming out of the bullpen for manager John Gibbons. Then someone got it into their head that the useful Rule 5 acquisition would look good in the starting rotation.

At this point, one might wonder if Biagini will be given even one more start to convince, with the rotation still in injury flux and, well, rather crummy.

At this point, one might wonder if Biagini would be a better fit restored to the ’pen rather than Buffalo for further adjustment to the starter role, which appears evermore quixotic.

Meanwhile, as Biagini struggled through a fitful third inning yesterday, call-up Deck McGuire was up and loosening in the bullpen. The right-hander was up and throwing again later in the game, though he was never summoned to the mound.

Is McGuire — the first draft pick of former GM Alex Anthopoulos, first round 2010, who was subsequently traded and took a meandering road to the majors — a short-term addition to the relief cadre or competing with Biagini for that job?

Don’t ask the skipper for clarification, or if they Jays are committed to giving Biagini another start to make his bones.

“Don’t worry about that now, will ya?” was Gibbons’ response to the latter query.

Though he sounded quite firm about the former. “No, we brought Deck up because we’re banged up down in that bullpen. They’ve been used a lot. If something happens, we need some guys, starter type, that can throw some length. Having said that, Deck’s been throwing very well down there in Triple-A and he’ll get his shot. I don’t know what’s going to happen but nobody’s competing against each other like that. No.”

And of course there’s bullpen mate Sam Gaviglio, who was promoted from Buffalo last week and earned the win in his Blue Jays debut against Boston on Friday. Might he be a stopgap starter until Marcus Stroman returns from his 10-day rehab for shoulder fatigue?

“That’s just another way of asking … (the same) question,” Gibbons snorted. “What do you think, I’m stupid? Probably. But I’m not dumb.”

So, we’re back to the beginning and Biagini’s X factor on this roster. Gibbons claimed to mostly have liked what he saw from the leaner righty on Sunday. “I thought he had some good stuff today. He battled, you know. But we’re having to play catch up definitely too much. And that makes it tough on a team.”

Toronto plunged into a 2-0 hole in the first inning on a single and a J.D. Martinez home run, then slipped back 3-0 in the third frame on a Jackie Bradley Jr. walk, a Mookie Betts single and steal, a Martinez walk, a Mitch Moreland walk — boos raining down from the Rogers Centre crowd on Mother’s Day with that run walked in, bases loaded — all before Biagini induced a double-play ball from Xander Bogaerts. Biagini threw 41 pitches in that inning, which is absurd, even though he held the Red Sox to just one run amidst the mess. In the fifth, it was Biagini’s runner – again, Betts, who really might be the best player in baseball right now – who singled and stole another base en route to making it 4-0 for the visitors, with John Axford taking over on the bump and Martinez stroking a single to left.

The Jays closed the gap to 4-3 in the bottom of the fifth, on singles from Teoscar Hernandez and Josh Donaldson and a smashing double off the bat of Justin Smoak. Russell Martin’s single off Hector Velazquez, in relief of starter Drew Pomeranz, brought home Smoak with the third run but that rally was snuffed by Kendrys Morales hitting into a double-play. Of course.

Afterward, an enquiring mind wondered aloud if Biagini has perhaps been ill-served by the Jays’ executive think tank Hamlet-ing over how the big lug can be best utilized.

“Um, I don’t think so,” Biagini responded. “Any chance to play at this level is really good, whether it’s bullpen or starter or both. A lot of guys have done that and made good careers out of it. There’s a lot of things that I learned from last year, going back and forth. There were things that got exposed from transitioning in the middle of the year. Not only changing roles but using the windup and putting that back into the equation.”

“They have been nothing but fair to me,” he insisted. “I can’t say that some of the things that I wasn’t doing well was a result of changing my roles. It was honestly a good challenge and a good opportunity for me to learn a lot. The timing of it all coming together takes more or less time for different people. I feel nothing but gratitude for the opportunity to do it.”

Adding, sotte voce in the scrum: “I’d appreciate it if you never asked that question again.”

To be fair, Biagini didn’t get much support from Toronto’s sputtering offence. Until the point where Jays batters put together four hits in the fifth, they’d struck out 36 times in the weekend series with the Red Sox. On a brighter note, Donaldson struck for his 100th double as a Blue Jay in his first at-bat. And Martin went 3-for-4 with a double, his three hits matching a season high.

The Jays were a disappointing 2-4 on the homestand, with a day off before a two-set against the Mets in New York.

Perhaps the start/relief quandary will be clearer by then. You think?

For his part, McGuire, primarily a starter in his career, is just appreciative of the chance to make an impression maybe. “I think of it as a second chance. You don’t get a lot of them in this game.”

To make room for McGuire on the 40-man roster, right-hander Carlos Ramirez was designated for assignment while infielder Lourdes Gurriel Jr. was optioned to Buffalo.

We miss his hair already.