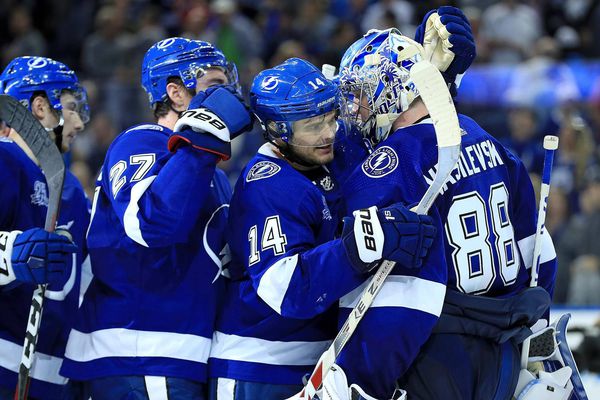 Alex Killorn broke a tie midway through the third period as the Tampa Bay Lightning scored the final four goals to rally past the Toronto Maple Leafs 4-3 on Tuesday night.

Victor Hedman, Ryan McDonagh and Nikita Kucherov also scored as Tampa Bay reached 50 wins for the second time in franchise history. Yanni Gourde had two assists for the Atlantic Division leaders, who moved five points ahead of second-place Boston for the top spot in the Eastern Conference.

Andrei Vasilevskiy made 27 saves and set a Lightning record with his 41st victory of the season.

Killorn took a pass from rookie Tony Cirelli and fired in a shot from the slot at 9:14 of the third to put the Lightning ahead after they trailed 3-0 midway through the second period.

James van Riemsdyk scored twice for Toronto, which fell to 28-2-2 when leading after two periods. Fredrik Andersen returned after missing two games with an upper-body injury and stopped 21 shots in the loss.

The Lightning played the final two periods without forward Ryan Callahan, who exited at 16:04 of the first after getting tangled up along the boards with Toronto forward Josh Leivo. Callahan left the ice favouring his right arm and shoulder area.

The Maple Leafs built a three-goal lead with the help of two from van Riemsdyk, the first at 15:06 of the first period during a delayed penalty call and his second 1:29 into the second while on a power play. Zach Hyman then took advantage of Tyler Johnson's turnover in the Tampa Bay end before beating Vasilevskiy with a wrist shot at 15:41.

Hedman answered for Tampa Bay with his 13th of the season 59 seconds later to cut into the lead heading to the third period.

The Lightning struck quickly in the third as McDonagh and Kucherov scored 2:08 apart to tie the score 3:32 in.