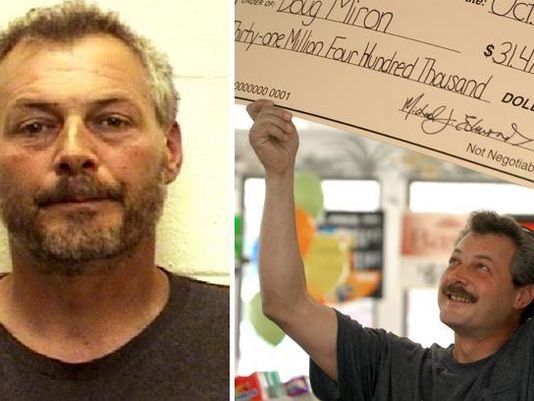 The black sheep of a prominent Marinette County family whose $31 million Powerball win only led to more notoriety and legal trouble avoided prison Tuesday when he was sentenced for stalking and other charges related to his obsession with a young woman who rejected his romantic interests.

Douglas P. Miron, 50, will have to serve a year in jail, with work-release privileges, starting in April, pay $55,000 in fines and serve four years of probation, with the threat of 3 1/2 years in prison if he doesn't follow all the rules.

“To some degree, the defendant’s wealth is what I believe motivated him to engage in this sort of out-of-control-I-can-do-whatever-I-want behavior,” said Assistant Attorney General Christopher Liegel, who prosecuted the case and urged heavy fines over prison time as punishment.

“I think there’s the perception, presented to court, that he won the lottery and became a jackass," Petit said. "He’s been the same throughout life … been one of those persons who wear their emotions on their sleeve.”

Because his father is the former Marinette County district attorney and his brother is a circuit judge there now, Miron's case was prosecuted by the state Department of Justice and heard by Door County Circuit Judge Todd Ehlers, who accepted the recommended sentencing.

"I’m sure your family is going to monitor your behavior very carefully, not that elderly parents should be responsible for doing that for a 51-year-old son,” Ehlers said, noting that the family's embarrassment was no factor in the sentence.

Miron was charged with nine felonies and a misdemeanor in August 2015, after a secret John Doe proceeding in Brown County to investigate the raft of offenses. Last fall, he pleaded no contest to two felonies, stalking and second-degree recklessly endangering safety,  and two misdemeanors of intentionally pointing a gun at someone and resisting or obstructing an officer.

Miron hadn't taken the college road like his brother the judge. He worked at a shipyard as a contractor and repaired furniture with another brother, who died in 2003. Relatives and family friends felt he wasn't in the best social circle, and he had some minor scrapes with the law.

Then in October 2009, he hit the big lottery jackpot. He chose the lump sum payout of $16.7 million, which shrank to $11.2 million after taxes, and suddenly became an even bigger topic of conversation and attention in the small community.

Miron bought a new truck, a Jaguar and a house on acreage with a landing strip. He helped out some people in tough financial jams, bought others snowmobiles and opened a restaurant where he hired friends.

But he also became very interested in a teenager who worked at one of his properties, and then rented a house to her and her mother. When the girl began rejecting his interests in a relationship, according to the criminal complaint, Miron began a series of threatening and criminal actions stretching from 2011 to 2014.

The girl said Miron tailgated her all the way home from Crandon after she wouldn't stay in his camper, shined lights on the house, broke in the door, and chased her and her boyfriend on U.S. Highway 41, ramming their car at 80 mph. The boyfriend's father told police Miron pulled him over one day and threatened to kill his son.

Another man who'd been in a business deal with Miron said he pointed a gun at him and demanded his money back.

Petit, the defense attorney, said the fines were a bigger punishment than it might appear for a lottery winner because Miron has given away millions of dollars and has mostly land and personal property left.

Miron told the judge he accepted the plea deal so his parents could stop worrying he might go to prison, but still disputes some claims of the victims, who Petit said exploited Miron after he had money.

“I’ve done nothing but help those people. I treated them like my own family,” Miron said. “And I’ve learned a lot.”