Reclaiming Our History on Canada’s 150th 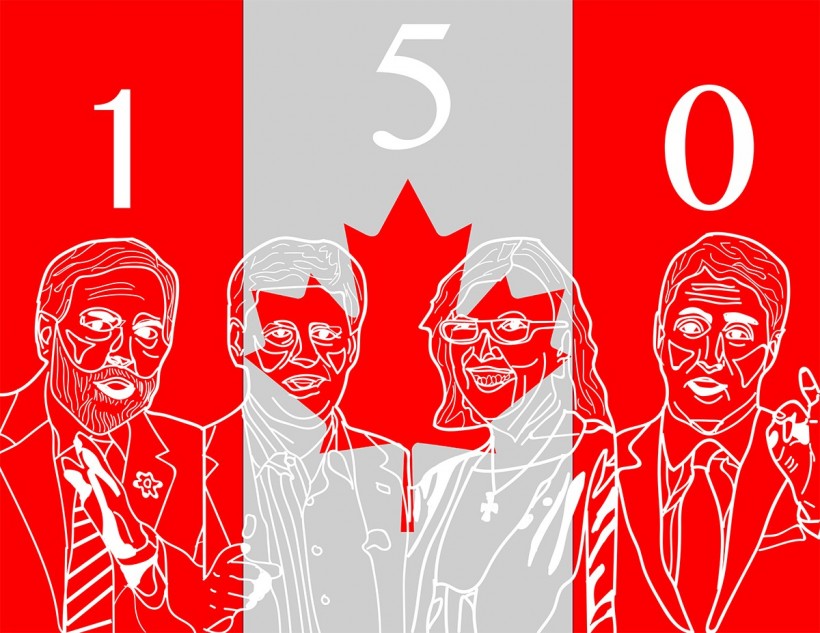 In my classes, we learned about settlers coming to Canada, hundreds of years ago, in search of a new world. The land, we were told, was beautiful, vast, and sparsely populated. The few people that did already live here—the “natives,” as we were taught to identify them—were happy to trade furs and goods with the newly arrived Europeans. We warred with the natives sometimes, but the relationship was mostly friendly. Then, diseases which Europeans had accidentally transmitted to the natives wiped out most of their population, opening up all of Canada for settlement expansion.

People began to pour in from all over the world, we were told. Railroads were built from east to west, and Canada became a country. We fought just wars alongside the British, we helped defeat the Nazis in the Second World War. We became peacekeepers elsewhere in the world, and a tolerant, multicultural society at home.

My teachers, like so many other people, loved to compare Canada to the United States—to use the big bad Americans as a way to illustrate Canada’s virtue. We never had large-scale slavery or Jim Crow in Canada. We never started useless wars abroad. We don’t have religious fanatics trying to stop students learning about evolution in schools. We have free healthcare. We’re polite and friendly. The world loves us.

We love to tell ourselves this story in Canada. It makes us feel good about ourselves. But like all nationalist origin stories, it’s a myth. Here, like everywhere, our history is much darker and complicated than we would like to admit. We have our fair share of skeletons in our closet.

This year is the 150th anniversary of Canadian confederation. As surely as we can expect waving flags and fireworks on Canada Day, we can expect to have this feel-good version of history drilled into our consciousness throughout the year. The Canadian state sees its 150th birthday as an opportunity to bolster loyalty, and our national founding myth is an important part of that process.

But 2017 also presents us with a unique opportunity to reclaim our history, to learn from it, and to use those lessons to build a better future. It presents us with a chance to challenge our national myths and see this country for what it really is.

Canada was built on the foundations of a massive crime, the theft of land from Indigenous peoples faced with genocide by European settlers. Diseases were introduced as acts of war. The Canadian state used starvation as a weapon against Indigenous peoples and kidnapped their children for Residential schools. Even today, the incarceration rate for Indigenous people is tenfold the rate for non-indigenous people—worse than it was in South Africa during apartheid, according to an investigation by Maclean’s.

Canada turned away Jewish refugees in the Second World War and held explicitly discriminatory immigration policies for most of its history. At home, domestic policies built a rigid race-based hierarchy as a way of creating working-class infighting while the rich built their fortunes on the backs of the poor.

The Canadian military, so often described as a global peacekeeper, fought its first international war in South Africa—helping the British fight a brutal imperial war against the Dutch for control of African land. In the time since, Canada’s armed forces have been used to support the corporate interests of Canadian companies in the poorer nations of the world.

But if the story of the Canadian state is one of power and violence, there is also a rich history of resistance and peoples’ justice in Canada. Throughout history, Indigenous people have fought with dignity against the theft of their land and cultures; workers have fought and held strikes to improve life for the poor; people of colour have fought for representation and fairness; women have fought for inclusion and bodily autonomy. Long fought battles by everyday people resulted in major victories, many of which we still hold dear today.

The desire for freedom and justice shoots like a lightning bolt through the dark history of Canadian state formation and consolidation, and that desire illuminates the way forward to a better world.

So this year, let’s remember Canadian history for what it really was—its violence, its elitism, and its racism. But let’s also remember the stories of people who got together and reclaimed the power that had been taken from them through collective action.

By reclaiming our collective memory, we can begin to view—with clear eyes—how we got to where we are today.