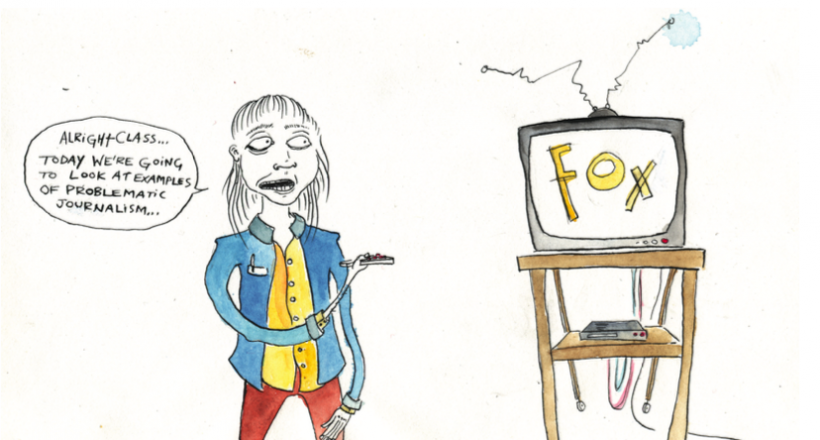 It merged the three branches of the program into one fluid major that was meant to incorporate all of the elements that make up a potential journalist’s skill set. However, it failed to integrate the education of Indigenous history and reporting into the new curriculum.

For decades, Indigenous peoples fought for social recognition of the genocidal crimes committed against them by the Canadian government. In 2008, those efforts culminated in the creation of the Truth and Reconciliation Commission. The TRC was meant specifically to address the legacies of the residential school system, which existed in Canada until 1996.

In December 2015, the commission published 94 Calls to Action—a list of recommendations for all areas of government and public institutions to reverse the damage done. These issues ranged from the protection of Indigenous languages and cultures to the improvement of medical and mental health care to the incorporation of Indigenous history into academia.

In addition to that, a specific call to action is made to all journalism and media schools across the country to make Indigenous history an integrated and mandatory component of their programs. As well, to include the mandatory study of Indigenous treaties and rights, the United Nations Declaration on the Rights of Indigenous Peoples, Indigenous law, and Aboriginal-Crown relations.

So far, we’ve yet to see any signs of this in most of Canada’s popular journalism schools. From Concordia, to Ryerson, to Carleton, courses that specifically focus on Indigenous history and how to report on and with Indigenous communities are conspicuously absent from the curriculum.

We believe that history classes on this subject are necessary for the education of journalists. There needs to be a full course in Concordia’s Journalism program that tells the truth about the relationships held between colonizers and Indigenous peoples in a clear cut way.

Having just one lecture on the topic occasionally included in our theory classes won’t cut it. Plus, it implies Indigenous issues aren’t important enough to warrant anything beyond just a scratching of the surface.

We need to ensure that future reporters conduct themselves with empathy and understanding from a well-informed standpoint. This knowledge will raise awareness crucial to the way that future stories are formed.

Additionally, there needs to be at least one course offered that focuses specifically on how to go about properly reporting on Indigenous matters and how to include Indigenous people in “non-Indigenous” stories rather than separating their voices from the rest.

In failing to offer this education, universities cause working journalists to risk misrepresenting Indigenous people with harmful stereotypes.

We’re not asking for a lot here. We’re asking for educators to create curricula that acknowledge the Truth and Reconciliation Commission’s Calls to Action. What’s the point of having these suggestions if they are ignored? Why revamp the program without incorporating them?

As students, we want to see the department make an effort to get educators into classrooms that will teach journalism students how to properly research their stories, how to interact and build long-term relationships with Indigenous sources, how to ask the right questions and how to do so in a respectful manner.

We want to see students learning how to create fully fleshed-out stories with the voices, opinions and issues of Indigenous folks in ways that break the status quo.

So although Concordia updated its Journalism program in the last year, we shouldn’t rest easy assuming that all the work is done.

Concordia should follow suit. Journalism is constantly evolving and our program needs to reflect that.