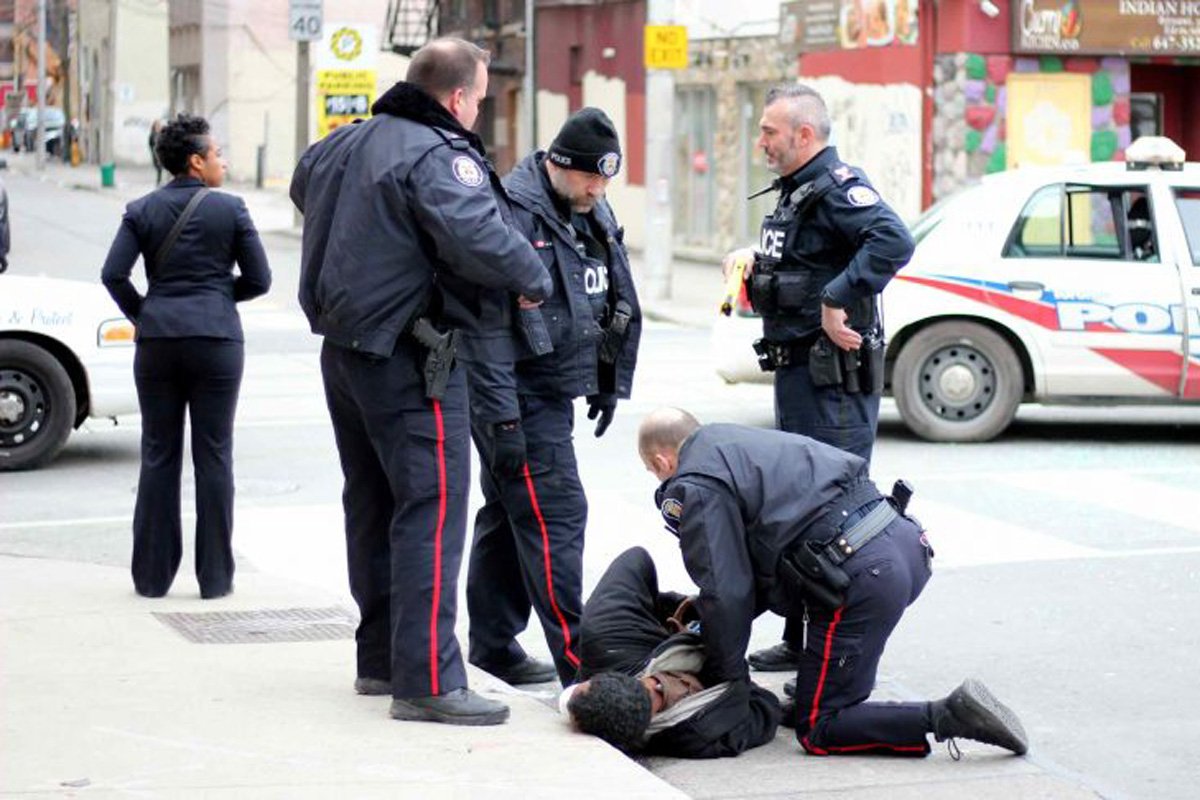 There’s cellphone video making the rounds out of Toronto of the violent arrest of a man laying motionless in the street, several police officers standing over him, including one officer who is kicking at the man's body multiple times. The same officer can be seen and heard firing off a Taser, twice. "Stop resisting! he shouts, his demand seeming to fall on semi-conscious ears of the man on the ground, who is still not moving.

This was the scene that ensued when Toronto police were called to detain a suspect after a spitting incident at Seaton House who has since been identified as 45-year-old Andrew Henry of no fixed address. He is facing nine charges, including allegedly assaulting a police officer.

After footage of Henry's arrest hit the local news cycle, Toronto police Chief Mark Saunders told CityNews that there would be a "thorough investigation," including of threats made by one officer against Waseem Khan, the man who was filming the incident. (Khan has since filed a formal complaint with the Office of the Independent Police Review Director)

Would there have been a Toronto police investigation at all if Khan had not brought out his camera that day?

It's doubtful knowing what we know of these kinds of police encounters – which happen far too frequently – and the current state of police and Black community relations.

For many Black and racialized men in Toronto, the possibility of a bad encounter with police is one fateful misstep away. Visible minorities both men and women find themselves stopped by police while using transit, while running errands or even walking through their own neighborhood.

"At 12 years old was my first encounter with the police," Randell Adjei tells NOW Magazine.

Adjei is a young entrepreneur and founder of RISE Edutainment, an arts organization that began as a monthly poetry slam and has featured the work of more than 2,000 local artists. But this wasn't always the case.

In his teens, the 26-year-old recalls the constant threat of violence and the sense of unease that would strike the moment he stepped outside for fear of a run-in with police. The feeling, he says, still burdens him today.

"When I leave my house, sometimes when I see a police officer, there's this tightness that happens inside my body," he says. “I didn't have to do anything to be policed. I just had to walk outside my house looking like this," Adjei says, motioning to his black sweatshirt and dark jeans.

Visible minorities are subjected to police scrutiny at far higher rates than non-racialized people. As has been documented, racialized men are three times more likely to be stopped and documented by police under the street checks practice known as carding, which critics contend amounts to racial profiling.

"The overwhelming majority of people who are stopped, questioned and documented are completely innocent. They have not done anything wrong,” says lawyer Anthony Morgan of Falconers LLP. “People think, 'If you have nothing to hide you should just be able to speak with officers' [but] there’s a long history of people knowing and feeling that they've always been subjected to this scrutiny and it’s always been unjust.”

Despite calls from critics and activists to end carding, new regulations introduced by the province late last year allowing police to continue to stop, detain and gather personal information, but only under specific circumstances.

But without numbers supporting the effectiveness of data collected under the practice for police investigations, and minimal accountability measures carried out to maintain the integrity of Toronto police who have been found in the past to lie, the question remains: why is carding still a thing?

In 2011, Buraa Abdulkadir and three friends were randomly stopped and questioned by two Toronto police officers as they walked through their neighborhood on their way to an after school program in the Lawrence Heights area.

Abdulkadir tried to exercise his right to walk away (which the new carding regulations also stipulate) when he was punched to the ground and found himself staring down the barrel of an officer's gun. The incident, dubbed the Neptune Four case, resulted in assault charges for all four, and an additional five charges, including intent to resist arrest – and a night in jail – for Abdulkadir.

He was fifteen years old.

The charges against Abdulkadir and his friends were eventually dropped and the officer involved, Adam Lourenco, charged with three counts of misconduct. In their case it was footage caught by nearby Toronto Community Housing cameras that led to their charges being dropped.

If Abdulkadir is distressed by the entire ordeal he is reluctant to tell me. In part because this is the first time we're speaking over the phone and in part because, in his experience, young men of colour have tragically met a much worse end in an exchange that he tells me happens so frequently for him that he's lost count.

"It's very hard for me to get shocked by anything really. I know one guy in my neighborhood who got killed by police,”says Abdulkadir. “I was able to get out of [my] situation relatively pretty good. Because I know a lot of people have it worse than me. That's how I look at it.”

I ask Abdulkadir how the experience has affected him emotionally. “I guess [I feel] a little sad but I'd say I’m a little desensitized. If we didn't have the video camera we would have a real different situation right now,” he says.

We want to believe our elected officials when they tell us there are policies in place  to ensure our safety and that the police are here to protect, serve the public. What we know from video proof is that this isn't always the case.